2. What is factor of evaporation ?
Answer: It is the ratio of heat change from feed water to steam and the heat of vaporization of steam at atmospheric pressure.

3. Materials which absorb neutrons and produce fissionable material are called ?
Answer: Fertile materials, such as U28 and Th22.

4. What is the process which produces fissionable material from a fertile material ?
Answer: Breeding. 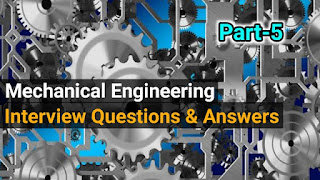 7. Which type of plant will you recommend for remote location if power is required in six to twelve months time ?
Answer: Diesel engine power plant.

8. Under what condition a nuclear reaction is said to be critical ?
Answer: For critical condition, the reaction should continue at a steady rate which is possible when rate of production of neutrons is same as the combined rate of absorption of neutrons and the rate of leakage of neutrons.

9. If a nuclear reactor generates more fuel that it consumes, it is called ______ ?
Answer: Fast breeder reactor.

11. Why the vane passages are gradually increased in size in successive wheels in steam turbine ?
Answer: The velocity of steam decreases in successive stages and to accommodate same flow per unit time, the area of flow must increase.

13. What is the latent heat of evaporation at critical point ?
Answer: Zero.

14. How much space steam will occupy at atmospheric pressure corresponding to 1 kg of water ?
Answer: 100 times the space occupied by 1 kg of water.

15. What is meant by quality of steam ?
Answer: It refers to amount of unevaporated moisture in steam. If steam is perfectly dry, it’s quality is 100%.

16. What is diagram efficiency in steam turbine ?

18. If super heat and condenser temperatures are unchanged and if pressure of steam is increased, then what happens to dryness fraction of steam after isentropic expansion ?
Answer: It will decrease.

21. What do you understand by forced convection ?
Answer: When convection heat transfer occurs between a solid body and a fluid and where circulation of fluid is caused and controlled by some mechanical.

22. In radiative heat transfer, a gray surface is one whose emissivity is _____ ?
Answer: Independent of wavelength.

23. What is the effect of water injection and steam injection in gas turbine of heat rate and power output ?
Answer: Water injection results in higher mass flow rate through turbine section and as rich electrical output is increased. However it increases gas turbine heat rate because of the additional heat consumption required to vaporise the water.
Steam injection increases power output and decreases heat rate because of its higher energy entering the combustion zone.

25. What are the advantages and drawbacks of centrifugal compressor and axial flow compressors in gas turbines?
Answer: Centrifugal compressors have following advantages :
—short length due to high pressure ratio attained in a single stage.
—simple in design, easy to manufacture, rugged in construction, less costly.
—more reliable in operation under all operating condition.
—less susceptible to the effects of deposits left on flow path.
—less sensitive to the fouling of the flow path.
—Good efficiency over a wide range of operation.
Drawback is larger cross-section area for same capacity and its unsuitability for high pressure ratios.
Axial flow compressor is more popular due to high delivery capacity, high compression ratio due to many stages, high efficiency (85-90%), low cross sectional area. Its drawback is sophisticated design and appreciable length due to large number of stages, narrow operating range for good efficiency, higher weight and cost, high starting power.

26. What is the difference between pinch point and approach point in connection with heat recovery steam generator (IIRSG) ? How they affect performance of IIRSG ?
Answer: Pinch point is the temperature difference between the gas turbine exhaust leaving the evaporator section and the saturation temperature of steam at corresponding pressure (drum operat¬ing pressure). Approach point is the temperature difference between the temperature of steam corre¬sponding to drum operating pressure and water temperature leaving the economiser. Both these vari¬ables affect the steam production and the cost and effectiveness of HRSG.
If pinch point is lower, total heat recovered in HRSG in higher and steam generation is also high. However lowering pinch point requires more heat exchange surface and increase in cost and draft side loss. Its optimum value is 8-10°C.
Lower is approach temperature, higher is steam production in economiser due to flashing which needs to be avoided for long life of tubes. Higher approach temperature increases the surface in evaporator section and assures higher stability.

27. How the efficiency of heat recovery in IIRSG increased ?
Answer: It can be increased by generating steam at more than one pressure.
Further improvement is possible by heating make up water/condensate in HRSG, generating low pressure saturated steam or dearation steam in HRSG using a low pressure evaporator, preheating the make up water in a heat exchanger before it enters deaerator, and circulate more water than necessary through the economiser and recirculate excess to the deaerator.

34. What is selective catalytic reduction (SCR) method for NO* control in gas turbines ?
Answer: SCR is a post combustion method in which a catalyst is installed in flue gas where temperature could be of the order of 15-400°C. It enables vaporised NH to react with NO* in exhaust gas to form N2 and H20. Vaporised NH is injected into exhaust gases before it passes through the catalyst bed. This process can achieve in excess of 90% NOx reduction.

35. What catalyst is used in SCR process for control of NOx in gas turbines ?
Answer: V2O5 supported by titanium or a mixture of titanium and silica is generally used as catalyst. Oxides of Ti and Mo are often incorporated as moderators.

36. Measure to minimise formation of NOx inhibit complete combustion and this results in formation of CO and voltatile organic compound (VOCs). How these are controlled ?
Answer: Catalytic oxidation, a post combustion treatment at 470°-600° temperature is used to reduce emission of CO and VOCs.

42. A gas having a negative Joule-Thompson coefficient, when throttled, will become …. ?
Answer: hotter.

44. Stirling cycle with regenerative arrangement and Carnot cycle operate within same temperature limits. What can be said about thermal efficiencies of these two ?
Answer: Thermal n of both will be same.

45. How does the stagnation temperature behave along a streamline in adiabatic flow with friction ?
Answer: It remains constant.

46. What is the frequency of secondary imbalance in four-stroke engine ?
Answer: Two times the engine speed.