152. Why axial flow compressor is preferred for gas turbines for aeroplanes ?
Because it has low frontal area.

153. What is the effect of inter cooling in gas turbines ?
It decreases thermal efficiency but increases net output. 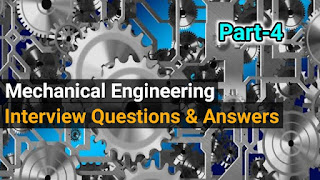 154. Why iso-octane is chosen as reference fuel for S.I. engines and allotted 100 value for its octane number ?
Iso-octane permits highest compression without causing knocking.

155. Why thermal efficiency of I.C. engines is more than that of gas turbine plant ?
In I.C. engine maximum temperature attained is higher than in gas turbine.

156. Which are the reference fuels for knock rating of S.I. engines ?
n-heptane and ISO-octane.

157. When effect of variations in specific heats is considered then how do maximum temperature and pressure vary compared to air standard cycle ?
Temperature increases and pressure decreases.

158. Quantities like pressure, temperature, density, viscosity, etc. are independent of mass. What are these called ?
Intensive properties.

159. The amount of radiation emitted per scm per sec is called …. ?
Emissive power.

160. In convection heat transfer, if heat flux intensity is doubled then temperature difference between solid surface and fluid will ?
Get doubled.

161. How you can define coal ?
Coal is a naturally occurring hydrocarbon that consists of the fossilised remains of buried plant debris that have undergone progressive physical and chemical alteration, called coalification, in the course of geologic time.

163. In order to increase efficiency and reduce CO emissions and other emissions, clear coal technologies are receiving major attention. What are these ?

166. Proximity analysis of coal provides data for a first, general assessment of a coal’s quality and type. What elements it reports ?
Moisture, volatile matter, ash and fixed carbon.

167. Ultimate analysis of coal is elementary analysis. What it is concerned with ?
Carbon, hydrogen, nitrogen, and sulphur in coal on a weight percentage basis.

168. Explain the difference between AFBC, BFBC, PFBC and PCFB in regard to fluidised bed technologies.
AFBC (Atmospheric fluidised bed combustion) process consists of forming a bed of inert materials like finely sized ash or ash mixed with sand, limestone (for sulphur removal), and solid fuel particles in a combustor and fluidising it by forcing combustion air up through the bed mixture. The gas flows thorugh bed without disturbing particles significantly but gas velocity is high enough to support the total weight of bed (fluidisation). At slightly higher velocity excess gas passes through the bed as bubbles (fluidised bed) and gives the bed the appearance of a boiling liquid.
Bubbling fluidised bed combustion (BFBC) has a defined height of bed material and operates at or near atmospheric pressure in the furnace.

169. What for Schmidt plot for is used in heat transfer problems ?
Schmidt plot is a graphical method for determining the temperature at any point in a body at a specified time during the transient heating or cooling period.

170. In which reactor the coolant and moderator are the same ?
Pressurised water reactor.

171. Which reactor has no moderator ?
Fast breeder reactor.

173. What is big advantage of fast breeder reactor ?
It has rapid self breeding of fissile fuel during the operation of the reactor, and thus, it offers about sixty times the output with same natural uranium resources through ordinary non-breeder nuclear reactor.

174. What is the purpose of biological shield in nuclear plants ?
Biological shield of heavy concrete prevents exposure to neutrons, beta rays and gamma rays which kill living things.

175. Which two elements have same percentage in proximate and ultimate analysis of coal?
Moisture and ash.

176. On which analysis is based the Dulong’s formula for the heating value of fuel ?
On ultimate analysis.

177. Which element causes difference in higher and lower heating values of fuel ?
Hydrogen.

178. Which heating value is indicated by a calorimeter and why ?
Gross heating value because steam is condensed and heat of vapour formed is recovered.

179. State the difference between ultimate and proximate analysis of coal ?
In ultimate analysis, chemical determination of following elements is made by weight: Fixed and combined carbon, H, O, N, S, water and ash. Heating value is due to C, H and S.
In proximate analysis following constituents are mechanically determined by weight. Moisture, volatile matter, fixed carbon and ash. Heating value is due to fixed carbon and volatile matter.

180. What is fuel ratio ?
Fuel ratio is the ratio of its % age of fixed carbon to volatile matter.

184. What do you understand by fuel cycle in nuclear plants ?
Fuel cycle a series of sequential steps involved in supplying fuel to a nuclear power reactor. The steps include : Mining, refining uranium, fabrication of fuel elements, their use in nuclear reactor, chemical processing to recover remaining fissionable material, re-enrichment of fuel from recovered material, refabrication of new fuel elements, waste storage etc.

186. What is a converter reactor ?
A reactor plant which is designed to produce more fuel than it consumes. The breeding is obtained by converting fertile material to fissile material.

188. What is the difference between conversion and enrichment ?

199. Which parameter remains constant in a throttling process ?
Enthalpy.